Framing the Syrian Monument of Xi’an in The Chinese Repository (1832-1851): American Beatitudes of Commercial Christendom, from the Foundation to Destruction of the Canton Mission Press 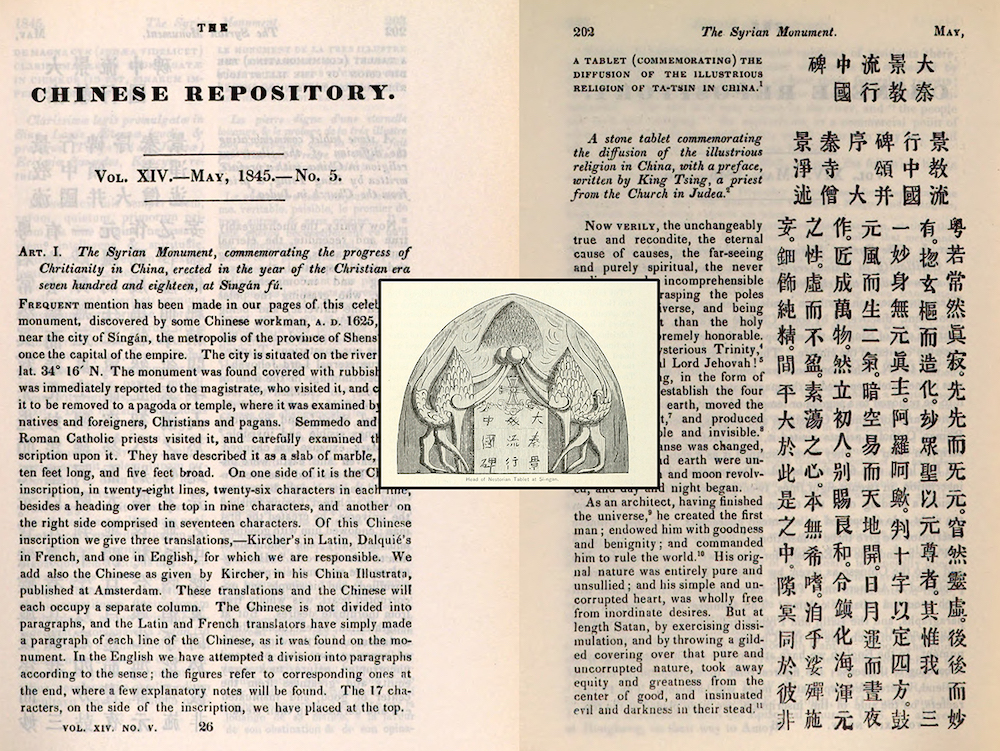 This fourth workshop in our series will focus on the materiality of periodical production in the anglophone missionary press in Canton (Guangzhou). The first American missionaries to China were keen to use metallic fonts in printing the Chinese language. To appreciate why metallic fonts mattered, this talk considers how the The Chinese Repository (1832-1851) juxtaposed articles on China’s deep history while reporting on turbulent news of the present.

The 50-minute workshop will include Q&A, with time for discussion and suggestions for further reading. The workshop is free. All are welcome. Please register here to receive the Zoom link for this free online workshop.

The Chinese Repository in Context

The editors Elijah C. Bridgman and S. Wells Williams printed the monthly periodical for two decades, through the First Opium War and Taiping Rebellion. Reports of opium smuggling and debates over “free trade” appeared next to scholarly surveys of dynastic succession and descriptions of regional customs, trade, government, and religion. Over the years, they were proud that Chinese script, pressed from metallic fonts, appeared with increasing frequency across all the articles. In 1845 Bridgman showcased this ability by looking back across a literal millennium to publish his new annotated translation of engravings from the “Syrian Monument,” a stone tablet of the 8th-century uncovered near Xi’an in 1625 CE (widely known as the Nestorian Stele). Bridgman’s print-cultural framing of this monument implies his aspirations as an American Protestant missionary in the global historical scale of Christendom. Just as insightful are the compounded failures that ensued, including the destruction of the Canton Mission Press on December 14, 1856 at the start of the Second Opium War and the waning support of it by church-goers, ministers, and merchants back in the United States.

Today The Chinese Repository offers much more than a first-hand record of events. The antiquarian research in its pages recalls an American brand of commercial Christendom that fixed attention on China’s ancient past while rationalizing gunboat diplomacy in the present, all the while investing faith in future powers of print technology to redeem China.

Dr. Kendall A. Johnson is Professor of Literature in the School of English at the University of Hong Kong where he researches material print culture in a transnational and global historical frame. His most recent single‐authored book is The New Middle Kingdom: China and the Early American Romance of Free Trade (Johns Hopkins University Press 2017). Other publications include Henry James and the Visual (Cambridge University Press 2007; 2011), Oceanic Archives, Indigenous Epistemologies, and Transpacific American Studies (Hong Kong University Press 2019, with O. Heim and Y. Shu); Narratives of Free Trade in Early US-China Relations (Hong Kong University Press 2010; contributing editor), and The Critical Companion to Henry James (FactsOnFile 2009, with E.L. Haralson). The Oxford Handbook of Twentieth-Century American Literature (edited by L. Bow and R. Castronovo) includes his chapter on opium consumption in the autobiographical writings of Emily Hahn and George Santayana. His work has appeared in American Literary History (ALH), American Literature, American Quarterly, The Columbia Guide to Native American Literature of the United States: 1945-Present (2006; edited by E. Cheyfitz), Modern Fiction Studies, and elsewhere.

Participation in this workshop does not require RSVP membership; all are welcome. For any other queries, please email us and direct your inquiry to our Vice President, Fionnuala Dillane.