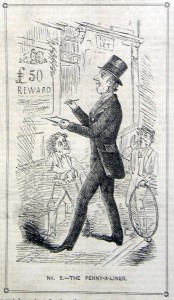 The Curran Fellowships are a set of travel and research grants intended to aid scholars studying 19th-century British magazines and newspapers in making use of primary print and archival sources. Made possible through the generosity of the late Eileen Curran, Professor Emerita of English, Colby College, and inspired by her pioneering research on Victorian periodicals, the Fellowships are awarded annually.

The Curran Fellowships are open to researchers of any age from any of a wide range of disciplinary perspectives who are exploring the 19th-century British periodical press (including magazines, newspapers, and serial publications of all kinds) as an object of study in its own right, and not only as a source of material for other historical topics. Applicants’ projected research may involve study of any aspects of the periodical press in any of its manifold forms, and may range from within Britain itself to the many countries, within and outside of the Empire, where British magazines and newspapers were bought, sold, and read during “the long nineteenth century” (ca. 1780-1914).

All previous awardees are listed below the guidelines.

Applications open November 15 and are due December 15.

See the current award calendar for all application and recommendation letter deadlines.

Please note that Officers and Directors of RSVP are prohibited from applying for RSVP grants and fellowships. Please contact RSVP with any questions not addressed below. Download a printable version of these guidelines here.

Given the uncertainty of travel during the pandemic, a no-cost extension of time may be requested at the end of the award period.

The Curran Fellowships are research and travel awards intended to support the use of primary sources for the exploration of any aspects of the British periodical press in any of its manifold forms, forms that may range from within Britain itself to the many countries, within and outside of the Empire, where British magazines and newspapers circulated during the “long nineteenth century” (ca. 1780-1914).

The Research Society for Victorian Periodicals (RSVP) intends to grant at least six Curran Fellowship awards each calendar year.  Applicants may request any amount of support up to $5000; the Curran Fellowships Committee may choose partial funding of successful applications. Please note that awards will be paid out in U.S. dollars.

The Curran Fellowships are intended to provide a researcher with funds to cover only those expenses directly related to research, such as transportation, lodging, photocopies, scanning, database subscriptions, and the like.  Indirect expenses are not covered.

The fellowship is named for the late Eileen M. Curran (1928-2013), Professor Emerita of English at Colby College in Waterville, Maine. She taught English at Colby from 1958 to 1992, and was a pioneer of periodicals research, serving as associate editor of the Wellesley Index to Victorian Periodicals, Vols. 1-3. A founding member of RSVP, Professor Curran established the Curran Fellowships in 2009, and bequeathed funds to RSVP for their continuance and expansion.  Her vision of the importance of basic research, compellingly presented, animates her namesake competition.

The Curran Fellowships are intended to support primary research on the nineteenth-century periodical press: magazines, newspapers, and serial publications of all kinds.  Therefore, eligible projects must engage with primary sources, whether those sources appear in print, manuscript, or digital facsimile.  All else being equal, preference will be given to projects that use or bring to light new or little-known materials about the periodical press.

The fellowship research must begin during the calendar year following the application deadline.

Only one application may be submitted by an individual per deadline.

Only one applicant is permitted per application.  (Those seeking support for collaborative projects should consider the RSVP Field Development Grants.)

Those holding academic appointments as well as graduate students and independent or retired scholars are equally welcome to apply.  An academic degree or affiliation is not required.

Applicants are strongly encouraged, but not required, to become RSVP members.

Officers and Directors of RSVP are not eligible to apply.

All applications must be submitted through the online application portal at https://rs4vp.smapply.io/ no later than 11:59 p.m. US Pacific time on the deadline listed in the awards calendar.

As a courtesy to evaluators, RSVP strongly recommends that applicants prepare their proposals using a readable font, not smaller than 11 point, with margins of at least one inch.  Documents may be single spaced.

An application includes the following components:

IV. How Applications will be Evaluated

A group of interdisciplinary evaluators with knowledge of periodicals in the long nineteenth century will use the following criteria to evaluate applications. Applications and letters of recommendation should be crafted with these criteria in mind.

Evaluators will use the evaluation criteria to identify the best applications. Final decisions and award amounts (up to $5,000) will be based on the overall budget of the program, an applicant’s specific requested amount, and the justification of that amount as put forward in the plan of work. Please note that awards will be paid out in U.S. dollars.

Please note that need is not a criterion.

If quality applications are received, RSVP anticipates naming at least six awardees at the end of the competition.

Award notification will take place by email. Awardees must confirm their acceptance of the award within two weeks’ time.

All decisions are final.  Unsuccessful applicants may choose to revise and resubmit their applications in future competitions.

Awards are made directly to individuals but may be paid, upon instruction from an awardee, through the awardee’s employing institution.  Indirect costs are not permitted.

At the conclusion of the grant period, awardees must submit a narrative report describing the work completed during the fellowship period and outcomes achieved or expected as a result.  The narrative report may be published on the RSVP website. All publications or other research outputs resulting from fellowship support must include the following acknowledgement: “This publication received support of a Curran Fellowship awarded by the Research Society for Victorian Periodicals and funded from the bequest of the Eileen Curran estate.”

Although RSVP membership is not required in order to apply for a Curran Fellowship, researchers in this field are encouraged to join RSVP if they have not already done so. Joining RSVP supports the Society in its support of our field, and the people who work in it.

Names with links include reports about the progress of research projects undertaken with Curran Fellowship funds. These reports give a fascinating look at some of the exciting developments in the field today.