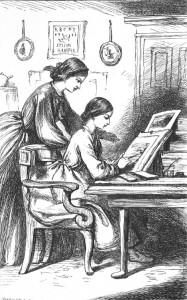 The Research Society for Victorian Periodicals, familiarly known as RSVP, is an interdisciplinary and international association of scholars dedicated to the exploration of the richly diverse world of the 19th-century press, both its magazines and its newspapers. Members of RSVP are involved in the study of British literature, and the history and culture of Britain and its empire, as well as in the emerging fields of book history and media history.

For over 50 years, RSVP’s distinguished journal, Victorian Periodicals Review, has carried articles, reviews, and research guides on a wide-ranging variety of topics. Through VPR as well as through its lively and collegial annual conference, the Society aims to stimulate the study and discussion of the roles played by the Victorian press and its proprietors, editors, illustrators, publishers, authors, and readers in shaping 19th-century culture.

The following officers, board members, appointed positions, and senior advisory council constitute RSVP’s leadership, as outlined by the Society’s Constitution and Bylaws.

RSVP was founded in December of 1968 at the Modern Language Association conference in New York by an interdisciplinary group of scholars led by Michael Wolff, who became its first president. Most of its founding members belonged to the informal scholarly collective engaged in research for Walter Houghton’s Wellesley Index of Victorian Periodicals and were eager to give a permanent organizational embodiment to the intellectual energy and enthusiasm generated by that remarkable project.

The 1960s witnessed an enormous upsurge of interest in interdisciplinary scholarship, particularly in the area of Victorian Studies. The vast range and number of Victorian periodicals was being recognized as an ideal resource for such scholarship since there existed periodicals touching on virtually every conceivable aspect of Victorian life. RSVP’s official publication,Victorian Periodicals Review, in fact came into existence even before RSVP itself. Commencing as the Victorian Periodicals Newsletter, the first number appeared in January of 1968 under the founding editorship of Michael Wolff. The journal began as a sort of intellectual clearinghouse for information, ideas, and projects relating to Victorian periodicals and evolved with the development of the interdisciplinary studies it represented into its present form. Its present title was adopted in 1978.

RSVP’s presidents from its founding have been: