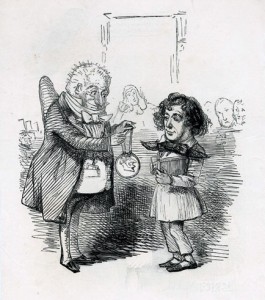 The core of RSVP’s mission is the support of scholarship about the world’s first fully industrialized press — the magazines, newspapers, and other serial publications that collectively made up so much of what was printed and read during the long 19th century. This vast printed heritage remains largely unexplored even now, and primary-source research of many different kinds is essential to furthering our understanding of Victorian culture. As a Society, we are dedicated to assisting scholars in these exciting explorations.

Thanks to the generosity of the late Eileen Curran, one of the great pioneers in the field of 19th-century British media studies, RSVP has vastly expanded funding for research in recent years, alongside its longstanding awards for the best book of the year and the best graduate student essay. Currently, RSVP is the world’s leading funding body for the support of research on the Victorian period, a distinction of which we are very proud. If your own research plans appear likely to shed substantial light on the world of the 19th-century press in any of its myriad forms, please consider applying for one or more of these grants and fellowships.

Please note that Officers and Directors are not eligible for any RSVP grants, fellowships, or prizes. Important deadlines are updated annually on our Awards Calendar.

The Curran Fellowships are travel and research grants intended to aid scholars studying 19th-century British magazines and newspapers in making use of primary print and archival sources. Generally multiple awards are given each year. The fellowship is made possible through the generosity of the late Eileen Curran, Professor Emerita of English, Colby College, and inspired by her pioneering research on Victorian periodicals.

The Linda H. Peterson Fellowship supports the study of any aspect of the periodical press in any of its manifold forms, and may range from within Britain itself to the many countries, within and outside of the Empire, where British magazines and newspapers were bought, sold, and read during the “long nineteenth century” (ca. 1780-1914). The amount of the award is $17,500, intended to support the researcher for a period equivalent to four full-time months.

The RSVP Field Development Grant is intended to provide a single researcher or a team of researchers with the opportunity to create resources that will advance the field of periodical studies. Eligible projects must articulate how the proposed resource will enhance the ability of other scholars to conduct significant research in the history of nineteenth-century British newspapers and periodicals. Examples of eligible projects include, but are not limited to:

The Colby Scholarly Book Prize is awarded each year to the scholarly book that most advances the understanding of the nineteenth-century British newspaper or periodical press. The prize is endowed in memory of Robert Colby and Vineta Colby, for their many fine contributions to the study of Victorian periodicals.

The Sally Mitchell Dissertation Prize is awarded annually to the best Ph.D. dissertation that explores the 19th-century British periodical press (including magazines, newspapers, and serial publications of all kinds) as an object of study in its own right, not as a source of material for other historical topics. Applicants must have successfully defended their dissertations in the previous calendar year. The prize was established to honor Sally Mitchell, a longstanding and highly valued member of RSVP’s leadership, and a committed and ardent mentor to graduate students.

The VanArsdel Prize is a graduate student award given to the best graduate student essay on, about, or extensively using Victorian periodicals. The prize was established in 1990 to honor Rosemary VanArsdel, a founding member of RSVP whose groundbreaking research continues to shape the field of nineteenth-century periodical studies.

The VPR Expanding the Field Prize is awarded annually for an outstanding essay that diversifies the existing geographic, racial, and ethnic composition of nineteenth-century periodical studies. The prize was established in 2022 in response to the recognition that nineteenth-century periodicals and periodical scholarship are key players in expanding nineteenth-century scholarship beyond Anglocentric perspectives. It seeks to center scholarship that deepens our understanding of BIPOC (Black, Indigenous, and People of Color) founders, editors, contributors, and readers of periodicals; enacts anti-racist and/or anti-colonial values; and considers the broad cultural impact of the British Empire around the world.

RSVP Travel Awards are designed to help defray the cost of travel to the RSVP conference for graduate students and independent scholars. Eligible applicants must be members of RSVP. The awards are given in memory of Barbara Quinn Schmidt, Josef Altholz, and William Scheuerle.

Past and Discontinued Awards