Erica Haugtvedt is a Ph.D. candidate at Ohio State University. Her research focuses on early forms of transmedia and participatory culture emerging from engagement with Victorian serial narratives published in numbers or in periodicals. She is fundamentally interested in the emotional dynamics of serial reading. Her article ‘The Sympathy of Suspense: Gaskell and Braddon’s Slow and Fast Sensation Fiction in Family Magazines’ will appear in the Spring 2016 issue of Victorian Periodicals Review.

Published two years after George Du Maurier’s Trilby was serialized in Harper’s New Monthly Magazine in eight parts from January to August 1894, the song captures the Trilby-mania that chiefly overtook the United States—but also overflowed into Britain—in the mid to late 1890s. The song is parodic, but its catalogue of Trilby items is not far off from the reality that Emily Jenkins and L. Edward Purcell have documented. 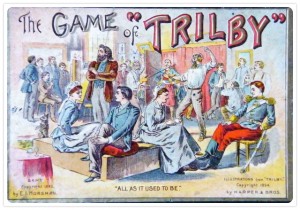 Trilby was co-opted for advertising restaurants, sausages, toothpaste, soap, shoes, jewelry, dolls, board games, and more. The expansiveness of Trilbyana begs the question: what is the relation between these things in the marketplace and Trilby? In my thesis I contend that the reaction to Trilby in the mid-1890s indexes the ways in which advertisers and consumers curated their engagement with the serially published novel. Not only does Trilby-mania anticipate aspects of fiction franchise marketing and merchandising of a later time, but the consumption of Trilby-emblazoned items emblematizes how readers exported condensed versions of Trilby’s meanings beyond the boundaries of the magazine in order to signify readers’ own values in a cultural environment in which Trilby was, for a while, the shared topic of conversation.

In my research project I argue that Trilby-mania depends upon a logic of proliferation, remediation, and convergence that operates in periodical literature, advertising, and consumerism during the Victorian period. In the merchandising of Trilby, marketers glancingly associate their products with aspects of the novel. Why market Trilby toothpaste unless the association is assumed to garner some positive attention, to present the toothpaste as an alluring alternative to non-Trilby branded items? Trilby, after all, has ‘thirty-two British teeth as white as milk and as big as knuckle bones,’ (Harper’s New Monthly Magazine February 1894, 335). The toothpaste thus implicitly promises to remake the consumer in Trilby’s image.

At the same time, as Michel De Certeau has argued, the consumer cannot be fully reduced to the image reflected in the advertiser’s intended messages. Consumption confronts production with its ‘ruses, its fragmentation (the result of the circumstances), its poaching, its clandestine nature, its tireless but quiet activity, in short by its quasi-invisibility, since it shows itself not in its own products (where would it place them?) but in an art of using those imposed on it’ (De Certeau, Practice of Everyday Life 31). Much like the reading activities of flesh-and-blood readers, the uses consumers make of these products are ephemeral, but their ephemerality does not necessarily render these activities less significant but rather more difficult to trace. Whereas De Certeau is eager to dismiss the evidence of advertising slogans, I turn to them to infer how the advertiser intended to market Trilbyana to a consumer audience. 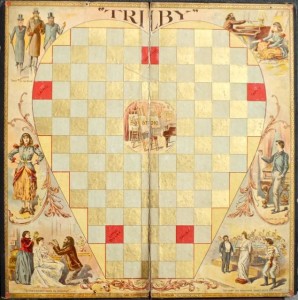 What can we learn from the merchandised products derived from nineteenth-century periodical literature? I want to suggest that attending to fiction merchandising in the nineteenth century allows us to better understand the dynamics of mass media and mass reading then and now. Franchise merchandising seems to better belong to the twentieth and twenty-first centuries, yet examples such as Trilbyana testify to the important influence of the Victorian period on the ways in which we now engage with fiction franchises. Indeed, I suspect that Trilbyana can tell us more about how we process and value stories beyond the reading experience ‘proper’—how we integrate narratives into our lives through accumulating and displaying things. Indeed, there is an obvious analogy between serial fiction and the culture of consumption in which Trilbyana participates: both are products of an industrial age, both operate through capitalist profit motive. Yet, I want to suggest that the meanings of Trilbyana (and serial narrative) do not end with profit. There’s more here. And while the meanings that readers/consumers derive from the things they purchase are not unified, the plurality of different products and different slogans derived from Trilby reflects the divergent uses that fin de siècle readers made of the novel. 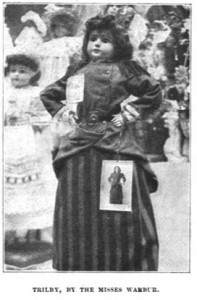 This endeavor is not without its considerable methodological hurdles. As I expand my archive to non-print objects, I intensify the struggle with massive materiality that Victorian periodical studies already confronts in the expansive and seemingly-ever-expanding (increasingly digitized) print archive. The directed digital search presents challenging obstacles to the kind of research I am trying to do. In the Spring 2014 issue of VPR, Linda Hughes wrote on the merits of reading the Victorian periodical ‘sideways’—reading for ‘spatio-temporal convergences in Victorian print culture’ (13). I am looking for spatio-temporal convergences between print and the marketplace that operates around it. Hughes writes: ‘The promiscuity of print, that is, its accessibility, variety, and multiple partnerings with readers, also drives its capacity to set dialogues in motion and to exceed ideological containment, scholarly modeling, and the control of authorities’ (5). While the massiveness of the nineteenth-century periodical archive is overwhelming, this very “promiscuity” is part and parcel of the wonder and excitement I find in periodical studies. I think it’s time to explore the convergences to be found outside of the printed page. Such a move is contiguous with the values this field has already demonstrated through pioneering media history and theorizing the historical experiences of reading in time. A good challenge has never stopped us before.