Emily Eiben is a PhD candidate in the department of Religious Studies at the Ludwig-Maximilians-Universität München. Her project focuses on the popularisation of Buddhism through the British periodical and newspaper press in the years 1875 to 1895 – between when the Prince of Wales visited the Buddha’s tooth in Ceylon in 1875 and when Sarah Bernhardt starred in a Buddhist-themed stage play in London in 1895. She is particularly fascinated by the way that pop culture and the media joined forces to create an enthusiastic new audience for a once little-known ‘heathen’ religion and the ways that this enthusiasm was fuelled by the British colonial encounter.

What’s So Funny About Buddhism? Unexpected Humour in the Late Victorian Popular Press

When I began exploring the depiction of Buddhism in the British newspaper and periodical press at the close of the nineteenth century, I was astounded by the diversity and sophistication of views I encountered in my sources. What really blew me away, though, was the surprisingly wide array of jokes, satires, and comics that the late Victorians produced about Buddhism and Buddhists. The Victorians thought Buddhism was funny? This was new. This comedic material—some of it still surprisingly funny 130 years later—shed a whole new light on the playfulness, wittiness, and sophistication of the Victorians’ encounter with Buddhism. More than any other discovery in the digital archives, my immersion in the unexpected humour of the newspaper and periodical press profoundly altered my understanding of my subject.

On the one hand, I stumbled across a plethora of groan-inducing one-liners about tree buds and ‘bud’-dhas, like the ones above, that feature a simple, straightforward style of humour based on the apparently universal Victorian penchant for puns and homonyms. This style of humour was designed to appeal to all ages, classes, and literacy levels; here were jokes that could be read aloud in the club, to a seatmate on the omnibus, or to the children on a Sunday afternoon. These one-liners encapsulated the ubiquity of talk about Buddhism in the 1880s; in my dissertation, they help me to demonstrate its total and seamless integration into everyday speech language and contexts. 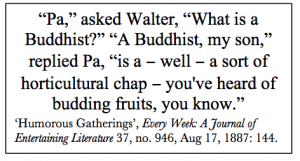 But barbless and family-friendly was notthe only type of Victorian humour, of course, and many periodicals took a sharply satirical view of their contemporaries’ interest in Buddhism. This Victorian penchant for satire has received renewed academic attention in recent years, especially as digitisation has made it possible to locate larger amounts of comic material from a wider variety of sources. (Most will know of Bob Nicholson’s project, with the support of the British Library, to create a “Victorian Meme Machine” – see his blog here. I can’t wait to explore it!) In my dissertation I examine a number of sharply satirical pieces involving Buddhism that appeared in some of the most widely-read popular comic papers in the in the 1880s, such as Fun, Punch, and Judy. These are not one-liners and puns, but elaborate comedic setups whose decoding requires deeper analysis of their context. In many of the satires, the new interest in Buddhism presents itself as a lively and competitive option for an increasingly choosy (if overwhelmed) public – faced with the task of evaluating increasingly diverse options in the marketplace of religious ideas.

In one of my favourite specimens, the comic paper Fun sharpened its knives on the Victorian national-cultural obsession with the discovery of Buddhist relics in a satire from 1889 titled ‘The Latest Discovery.’[1] The satirical ditty is a direct commentary on British archaeologist James Campbell’s discovery near Asoka (India) in late 1888 of a fingernail supposedly belonging to the Buddha. The discovery was first reported in England by the Daily Telegraph, and the story was quickly picked up by the other major dailies—The Spectator and The Times—and then by evening society papers such as the Pall Mall Gazette. Fun‘s piece, published a scant week after the serious newspaper reports, appears close on the heels of the discovery and is obviously eager to take the wind out of its sails and make the whole episode look ridiculous. Fun‘s humorous ‘take’ on a serious archaeolo 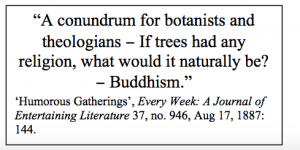 gical find transformed how I viewed the Victorians’ responses to such discoveries.

I also unearthed a plethora of quotes and quips that were strongly suggestive of how Buddhism formed part of the common cultural currency of the period. In many cases, a mere reference to the Buddha sufficed to imply a world of meanings. Most amusingly, in the political realm, both Disraeli and Gladstone were compared to Buddha when they wore passive or bored expressions in Parliament: “The Prime Minister [Disraeli] moves on sublimely indifferent to all that irresponsible and frivolous outsiders can speak or print. He appears, like Buddha, to be absorbed in contemplating with imperturbable self-satisfaction, his own perfections of his policy, and nothing can disturb his blissful reveries.”[2] The allusion was not party-specific: Gladstone, too, was described in 1883 as possessing that “bland passivity with which the image of the Buddha contemplates the prostrations of his adorers.”[3] (The likeness does seem more fitting for Gladstone than for Disraeli!) These short quips rely on a familiar interpretation of Buddhism that draws mainly on the remarkably persistent popular understanding of Buddhist nirvana as a passive cessation of interest and activity, if not a complete annihilation of personality. Here, too, was more evidence of exactly what I was hoping to prove in my dissertation: that Buddhism had been absorbed into the quotidian language of everyday men and women.

The jokes I found were instrumental in changing my approach to my subject and in deepening my appreciation of the sophistication with which the late Victorians tackled the cultural developments of their day. Specifically, these comedic materials assisted me in gauging the extent to which Buddhism had penetrated popular discourse, offering valuable evidence for understanding both the depth of knowledge as well as the types of associations that circulated in popular culture. Satire, in particular, is tightly bound to popular culture in a mutually (de)constructive way and offers unique insights into contemporary cultural concerns. Most of the jokes I discuss in my dissertation work with, and play off, other contemporary discourses; most are only obliquely funny (if at all) until one probes the social context of the joke and the frameworks of knowledge that undergird it. 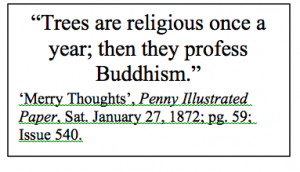 Finally, these comic materials bear powerful witness to the active role played by the mass media and popular culture in shaping contemporary opinions. The jokes I mention here are creative and constructive (rather than merely derivative); they use contemporary forms and formats to comment on what was, at the beginning of the Victorian era, still a highly specialised topic for academics and missionaries. Comic magazines such as Punch and Fun as well as family magazines such as All the Year Round, played a central role in translating serious, abstruse Buddhism into the language of popular culture. This insight was instrumental in transforming how I understood the late Victorians’ talk about Buddhism. The wry, winking humour of the popular periodicals provided a much-needed antidote to the moral seriousness and intellectual intensity that one finds in more ‘serious’ periodicals, and reminded me again and again that—contrary to popular contemporary stereotypes—the Victorians may actually have had a better sense of humour than we do. It was in their jokes, of all places, that the Victorians really came alive to me, practically leaping off the pages into the present with a sense of humour that works across time.