Megan Peiser is a PhD candidate in the department of English at the University of Missouri where she is currently working on her dissertation, ‘British Women Novelists and the Review Periodical, 1790-1820’. Her project uses her Novels Reviewed Database, 1790-1820 (NRD) to track the contemporary critical response to the only period in literary history when women published more novels than men. She is particularly interested in how the fields of book history, literature, digital humanities, and material culture intersect in the field of periodicals studies.

Review Periodicals and the Visibility of William Lane’s Minerva Press

If you opened a Review periodical in the late eighteenth or early nineteenth century, you would find, tucked in the less prestigious Monthly Catalogue section, reviews of novels published by William Lane and his notorious Minerva Press.[1] Review readers knew how to navigate the monthly Review periodical, reading longer reviews of more prestigious publications in the opening 60 to 100 pages, and flipping to the back pages where shorter reviews were divided by genre. The ‘Novels’ section was the penultimate section (followed only by ‘Sermons’). Regular Review readers would find short reviews there, very often of novels published by William Lane. Indeed, almost every issue of The Monthly Review and The Critical Review from 1790 to 1820 included a review of one of Lane’s novels.

Despite an almost constant presence of his novels in Review publications, William Lane’s Minerva Press was largely condemned by contemporaries, and is only now beginning to receive attention from scholars. The Minerva Press and the novels it produced became synonymous with hack writing, and factory-produced plots. Lane’s novels fed his own circulating library, and the many other lending libraries popping up around England during the period. It is, in part, thanks to Lane that novels were made available widely and cheaply for the growing population of novel readers of the early nineteenth century. It was also thanks to Lane’s Minerva Press that many women writers became published novelists during this period. Lane’s influence is perhaps hard to see because the novels he published have not made their way into our modern canon. However, by reading Review periodicals from the period with a new methodology, we can piece together a picture of how the reading public might have encountered Lane’s novels.

In my project I research Review periodicals using a combined qualitative and quantitative method. I read periodicals qualitatively by analysing their contents page-by-page, via archives, microfilm, and digital reproductions. And I also read Review periodicals through data analysis, using my Novels Reviewed Database, 1790-1820 (NRD). The NRD includes data on 1,215 novels, 1,639 book reviews, 445 identified authors, and more. This two-pronged approach has brought me some surprising insights in to the practices of criticism by the first two review periodicals in England: The Monthly Review and The Critical Review. The contemporary critical response to this period in the novel’s history, and this period of women writers’ dominance of the novel has not yet been closely studied. The NRD enables me to conduct a study of a large amount of textual information—thirty years of reviews—to identify trends in criticism, authorship, elements of the novel genre, and as in Lane’s case, publishing.

The period from 1790 to 1820 that the NRD explores is significant in women’s literary history—women writers were, for the first time, publishing more novels than men. The Minerva Press was a great supporter of their dominance, putting out more works by women than any other publisher. 1790 to 1820 is also the period during which the Minerva Press was booming. Set up by William Lane at Leadenhall Street in London in 1790, it became synonymous with voluminous and hastily printed novels that Jane Austen would call ‘the trash with which the press now groans’.[2]

Using the NRD I have found that the novel publisher long labelled a hack, William Lane, was very visible in the Reviews. Novels in our modern canon, like those of Frances Burney or Jane Austen, received more pages of review, and reviews in the prominent front section of the Review periodical (rather than relegated to the Monthly Catalogue), but Lane was the most visible in terms of volume. The Reviews’ mission to review all recent publications forced them to include even those of which they disapproved, and this practice worked in Lane’s favour.

William Lane’s Minerva Press published one third of all new novels in London during the period the NRD considers.[3] If a person were a regular shopper at bookstalls in the metropolis, it would be impossible to overlook the degree to which Lane’s publications dominated the novel market. But what about those many readers in England not strolling the streets of London? What about rural readers? Subscribers to circulating libraries? They were reading Reviews. Derek Roper estimates that one sixth of England’s reading public was purchasing a Review periodical, and that as each issue was likely read by upwards of 10 people: much of England’s reading population was consuming a Review periodical.[4] And where novel reviews were concerned, Lane was easy to see in their pages.

Lane far outstrips the others in number, receiving 272 reviews. A novel reader using the Reviews as their guide could not have thought of the marketplace without Lane. When it came to number of reviews by publisher, Lane and the Minerva Press were most visible. A reader of Review periodicals would reliably run into a review of one of Lane’s works every month.

But what about the novel-reader who paged through the front section of the Review periodical – the section with longer, essay-style reviews? The NRD enables me to create data visualisations. These visualisations (the charts included here) show how changing our question about what makes a novel-publisher visible to Review readers re-casts Lane’s dominance as the most visible novel-publisher from this period. We have considered that the number of reviews might make Lane more visible to Review readers, but how might the location of the reviews present him to those readers?

Only 11% of all novels reviewed during this period were featured in the front section. As Chart 2 shows, between 1790 and 1820 Lane had a mere five novels reviewed in the front, more prestigious section of the Reviews. Longman’s novels received the most front-section reviews with 37 (approximately one novel per year). Cadell is the only publisher whose novels are reviewed equally in both sections. 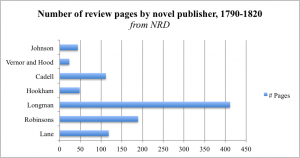 The number of pages of review space in Chart 3 is calculated by combining the number of pages of criticism, and the number of pages of excerpt from the novel each review printed. Long excerpts featured in the front section almost exclusively. This explains Longman outstripping the other publishers by more than 200 pages. Those novels reviewed in the Monthly Catalogue could expect a few lines of criticism at best. Because Lane has the most novels reviewed in the Monthly Catalogue (see Chart 2), his sheer volume of reviews calculates a page space equal to that of Cadell seen here in Chart 3.

Even though Lane’s novels are not so prominently placed, or as lengthy as Longman’s, he still maintains strong visibility in two of the three categories the NRD has helped us to consider. In number of reviews Lane is clearly #1, and his novels still make a strong showing in terms of number of pages. It is likely then that a regular Review reader of the period would have been just as familiar with Lane and his novels as Jane Austen’s biting comment shows she was. Studying Review periodicals helps to deepen our understanding of his dominance of the novel market.

Using the NRD helps us to think about the variety of ways a Review reader might understand the novel marketplace, and Lane’s role in it. While a reader in the period would not have these charts available to them, they would have felt the levels of representation that my findings reveal to modern periodical scholars about Review visibility. When researching periodicals it is often difficult to grasp their influence on their contemporary readers. Even when we read historical periodicals widely and deeply, we are still doing so in a removed state. Quantitative readings of periodicals cannot make up for our lack of historical proximity, but they can help us to ask new questions about periodicals that our distanced reading obscures from our view.

[1] I adopt Derek Roper’s practice of referring to periodicals as the ‘Reviews,’ and individual articles within the periodicals as ‘reviews’. See Derek Roper, Reviewing before the Edinburgh, 1788-1802 (Newark: University of Delaware Press, 1978).