You can get in touch with Ann on Twitter @ann_m_hale and at  www.ann-m-hale.org

Recently, I participated in a graduate conference at Senate House in London. I was there to talk about my research on English legal periodicals published between 1800 and 1900. As I walked into the room, I felt a shock of recognition. A painting hanging behind the speaker’s table depicted Lord Henry Brougham (1778–1868). Was it serendipity that Brougham’s portrait was behind me as I presented my work? 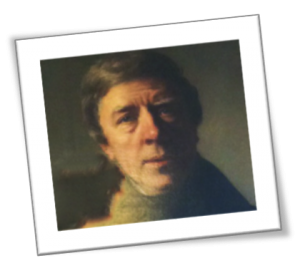 Brougham surfaces repeatedly in legal periodicals from the first half of the nineteenth century. He is perhaps best known as a co-founder of and contributor to the Edinburgh Review (1802–1929). My interest in the man relates to his role as a barrister, Member of Parliament, and an advocate for law reform. The possibility of law reform posed a threat to the profession, its practices, and its autonomy. To wrap my arms around the role that a century’s worth of legal periodicals played in the formation and consolidation of professional identity, I am focusing on points at which the profession was under external or internal pressure—moments like Brougham’s advocacy for law reform. His ideas were discussed in both the legal and popular press, which allows for a comparison of how lawyers are represented within the profession versus how legal professionals are represented in popular media. After all, just as in the nineteenth-century, today’s popular media tends to generalize about the profession using high-income or celebrity exemplars, while internal professional discourse is far less reductive (although not entirely inclusive).[1]

Since encountering Brougham’s portrait, I have been thinking a lot about serendipity. In the 1754 letter in which Walpole coined the term, he wrote:

I once read a silly fairy tale called the Three Princes of Serendip: as their Highnesses travelled, they were always making discoveries, by accidents and sagacity, of things which they were not in quest of. […]

Walpole goes on to write that serendipity is ‘accidental sagacity (…no discovery of a thing you are looking for comes under this description).’ Scholarship is a search—an on-going quest—so serendipity is possible at any time. When I recognized the person in the painting, I was not seeking anything in particular. However, the conference was part of an ongoing academic quest. The Brougham portrait’s presence was serendipitous because it triggered an intellectual connection—the accidental sagacity. It would not have been serendipity had it not been for the prior accumulation of knowledge to facilitate the formation of unexpected links. As a friend put it, scholarship changes your perspective. You see the world differently. Serendipity is, in my opinion, a special variety of changed perspective.

I would not be working on nineteenth-century legal periodicals had it not been for serendipity. As a “recovering lawyer,” my own professional identity was shaped (and often marginalized) by bar publications. Both during my legal studies and after I was qualified to practice, the local bar magazine guided my attention to areas of professional concern and interest: key cases, changes in the law, colleagues’ professional accomplishments, book reviews, etc. As my role in the profession changed from student to practitioner to non-practicing member of the bar, my sense of professional affiliation also changed. Sometimes the periodical reinforced my sense of belonging; sometimes it highlighted my invisibility or marginality. Years later, as I was finishing an MA in Literature and considering whether to embark on a PhD focused on legal periodicals, I saw a Twitter post describing a studentship on nineteenth-century legal periodicals. Quest plus sagacity equaled an indication of what my academic future would be. Serendipity.

Publishing, digitization, and academic trends point to digital serendipity becoming the more common experience of the two. In his 2008 VanArsdel Prize-winning essay ‘The Random Selection of Victorian New Media’, Paul Fyfe discusses the ‘serendipity of the database’ and the proliferation of data sources that facilitate ‘serendipitous discoveries and accidental insights’ (4, 12). The sheer volume of digitized material and number of searches run within databases surely must increase the likelihood of serendipitous discovery. The speed of database searches dwarfs the pace of searching through the material archive. The spread of digitization and the emergence of archival policies limiting access to original materials when digital versions exist may also limit access to the experience of material serendipity.

The protectionism of the legal profession means that nineteenth-century legal periodicals have not been digitized to the same extent as other nineteenth-century professional or popular publications. In his 1974 ‘Victorian Legal Periodicals’ article in VPR, Richard A. Cosgrove wrote: ‘In view of the number and variety of Victorian legal periodicals, the diligent scholar will find evidence on almost every conceivable topic’ (23). Forty-one years later, this rich wealth of publications remains under explored. One of the challenges that I have encountered since starting my PhD research is the sheer number of publications and their many title changes and mergers. I am developing a visual timeline (Figure 1) in conjunction with a detailed bibliography, which I plan to make available online. 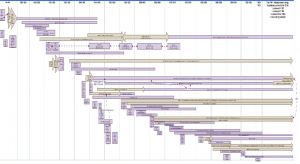 The visualization makes it clear that legal periodicals were being published in the first two decades of the century, but longevity was not achieved until the third. I am particularly interested in the many short-lived publications, not only because they generally receive less scholarly attention, but also because in some cases they adopt popular media innovations that may not sufficiently further the formation of individual and collective professional identity.

My approach to nineteenth-century English legal periodicals differs in several ways from those of the primarily legal scholars who have taken up the subject previously. First, my interdisciplinary perspective combines literature, law, and periodical studies. Second, my definition of legal periodicals encompasses both professional and popular publications, such as George Newnes’s The People’s Lawyer (1885–1886). Third, I am employing both close and distant reading techniques. Of course, neither ProQuest nor Cengage include legal periodicals in their collections. The primary source for legal periodicals from the nineteenth century is HeinOnline, which caters to legal academics and practitioners. Its collection of English periodicals is not as extensive as its American collection. The lack of access to digital sources has limited to a certain extent my ability to employ distant reading techniques. But, it has not limited my access to material and digital serendipitous moments.

Serendipity in the material archive is a slow wander through every room of a virtual edifice—measured, physical, and often dusty. For example, when I was researching W. T. Stead, my MA supervisor suggested that I take a look at the Link (1888). Flipping through the periodical page-by-page, I was surprised to come across a legal advice column: “The Consulting Room of the Law and Liberty League.” I had never encountered a legal advice column before. A year or so later, after embarking on my PhD work, I decided to return to legal advice columns as a way of exploring how legal professionals represented themselves and the profession in the popular press. I unearthed a surprising number of columns through traditional and digital searching. Then, I had a moment of serendipity. A colleague in the US asked if I could look up a story in Cassell’s Saturday Journal (1883–1921) when I was next at the British Library. As I flipped through a crumbling volume to locate the first page of the story, I realized that the facing page included an Answers to Correspondents column with a section devoted to legal questions. Material serendipity … and a lap full of periodical crumbs.

The desire to identify two forms of serendipity probably says more about the prevalence of change in academic research than the nature of serendipity. My own academic career has stretched from solely material to today’s material-digital blend. I do not want to see the balance shift to the digital alone. Both are equally important and useful, but they are far from identical. Identifying and appreciating the differences between moments of serendipity while working in the material archive and moments of serendipity experienced in the digital realm is my way of suggesting that the expansion of digital resources should not be accomplished through the sacrifice of access to the material. I want to be able to come across surprising connections like Henry Brougham’s portrait while running database queries, flipping through crumbling periodical volumes, or walking into a conference room to present my research.

[1] On April 23, 2015, the Telegraph published a story on lawyers’ earning potential. It featured a photograph of Amal Ramzi Clooney and the caption: “Law graduates can expect to start work on double the national average wage.” The newspaper holds up a very narrow band of lawyers as representative of the whole. The article gestures toward the expense of pursuing a law degree, but it completely ignores those who fall outside earnings averages, such as the public sector lawyers whose salaries have significantly fallen in recent years in light of budget cuts. After the article’s publication, a number of public sector lawyers spoke out against the article’s misleading portrayal of the profession. The following day, an article in The Times at least makes it clear that only a small group of “top” lawyers will achieve such salaries. The Times also mentions those “at the other end of the scale … who take criminal legal aid cases [and] have seen their incomes fall due to severe cuts to the legal aid budget.” This single contemporary example demonstrates why my work on professional identity in the nineteenth-century legal and popular press is important for understanding contemporary representations of professionals and their influence on professional identity.