Lucy Warwick is a PhD candidate at the Oxford International Centre for Publishing Studies at Oxford Brookes University. Her thesis focuses on the representation of the British Empire in the works of the Society for the Diffusion of Useful Knowledge, 1832-1845.

She can be contacted via Twitter @LxWarwick and at lwarwick@brookes.ac.uk

Piecing the Story Together

They are probably the most dreaded and feared words for any researcher: ‘not in place’, or even worse, ‘missing’, ‘lost’. These words strike fear into my heart as a library invigilator as well as a researcher.

Sometimes the archives just don’t exist, they’ve been ‘lost to the war’, or simply thrown away, but sometimes items have gone missing more recently. This is often a more frustrating situation, and has been a frequent occurrence on my mission to uncover the work of wood engraver and draftsman, Stephen Sly. 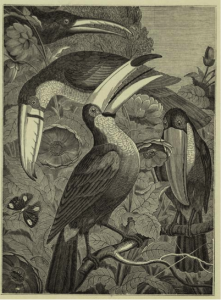 My work on Stephen Sly is part of my PhD thesis at Oxford Brookes University which investigates how the Society for the Diffusion of Useful Knowledge (SDUK) represented the British Empire in their publications. The Society was founded in 1826, with Henry Brougham as its chair, and several prominent men on its committee, including politicians, academics, men of science, and of religion. The SDUK aimed to ‘impart knowledge’ to those who had no access to schooling, or simply wished to learn alone. It began its publishing operations in 1827 with scientific treatises on subjects such as mechanics and optics, before moving on to subjects of a broader appeal, including several on wildlife- wild and domestic, plants- edible and ornamental, and travellers’ tales of foreign lands. However these were sold at 2s, or 4s 6d (bound in fancy cloth) and were therefore still fairly expensive. In March 1832, under the superintendence of publisher Charles Knight, the Society began its Penny Magazine, aiming to provide an alternative to the coarse language and provocative politics of the radical unstamped press. From the start, Knight, as editor of the Penny Magazine, wanted to provide his readership with high quality illustrations to aid the reading of otherwise complex articles.

The Penny Magazine is not unknown to us, but there is a distinct lack of information on those who created the illustrations the magazine is known for, and indeed, was bought for. This left a gaping hole in my research which I was determined to fill. In order to understand the magazine’s production I wanted to know the minds behind its biggest selling point. The illustrations in the magazine are nothing less than eclectic and encyclopaedic; they range from reproductions of great works of art, to views of British cities, to peoples and animals from far-flung corners of the globe. Who were the men that brought the world to the fingertips of the Great British reader?

Knight’s circle of draughtsmen brought together by the Penny Magazine included two prominent names: William Harvey, and John Jackson. As pupils of the ‘father of wooden graving’—Thomas Bewick—their names survive, but another part of Knight’s circle remained shrouded in mystery: Stephen Sly & Co.

As far as I am aware, Knight’s archive was largely thrown away by his wife, and any remains were destroyed in the Second World War, so my first port of call in researching the mysterious Stephen Sly was the SDUK archive. To my delight, Sly was listed twice in the SDUK correspondence index, for one personal folder of correspondence, and another addressed to the firm of Sly, Wilson and Evans. UCL, who hold the archive, allow six items to be pre-ordered two weeks in advance – you have to pick wisely! I chose the Sly correspondence and the corresponding out-letter books, as well as the boxes of papers on illustrations belonging to Charles Knight. This seemed to me like it would give me the whole picture of the relationship between Knight, the SDUK, and Sly.

In the two weeks leading to my archival visit, I did as much additional research on Sly as possible. I found entries for him in map engraving indexes, and several mentions in contemporary periodicals. These sources all gave me glimpses into his life, but most turned out to provide contradictory dates, and almost no insight into Sly’s work outside of the SDUK.

Arriving at the archive, I was incredibly excited to be treading new ground, revealing the life of a talented, but forgotten, engraver. I opened the box of ‘S’ correspondence and sifted through to find Sly’s folders. They weren’t there. I checked, and checked again. That dreaded word ‘missing’ came to mind.

Without archival records from Knight or Sly, analytical lists, found in ‘One Hundred and Fifty Woodcuts Selected from the Penny Magazine: Worked by the Printing Machine, from the Original Blocks’ (published by Knight in 1835) and copies of accounts forwarded by Knight to the SDUK, are the only method of discovering which woodcuts were Sly’s, and where they were used. The second image lists which woodcuts were designed, drawn, and engraved by the firm. (UCL, SDUK Papers, Bills and Receipts, Item 94).

Only a year into my doctoral research, I hadn’t experienced this before. What do you do when archival papers are missing? They’re the truest window into the past a researcher can find, and provide answers that no secondary source can replace. I continued to see if I could salvage details of Sly’s life and work anywhere. Charles Knight sent lists to the SDUK of every woodcut Sly made for their volumes, as well as information relating to how much they cost, but there was nothing

on the Penny Magazine at all. There was, however, a circular in the box that listed Sly, Wilson and Evans as the proprietors and publishers of a scientific and literary journal, The Verulam. I located two copies of the journal, both in the British Library. I was elated! Sly’s work was within my reach. But when I arrived to the reading room, my order had been cancelled, and I met those words again: ‘lost in the war’. Sly continued to evade me.

My last hope was a copy of The Verulam in the British Library’s Newspaper Reading Room, which, against the odds, was there and in place! It revealed much about both Sly’s early work, and a little about his interactions with the SDUK.

The masthead of ‘The Verulam’ reveals the importance the firm placed on illustration, and the journal includes several woodcuts throughout each issue. Interestingly, the imprint reads: ‘Printed, Published, and Engraved by the Proprietors, SLY, WILSON, & EVANS, Wood Engravers TO THE SOCIETY FOR THE DIFFUSION OF USEFUL KNOWLEDGE…’. This is just one indication that the firm were the main wood engravers to the Society despite their invisibility.

So I was left with fragments: snippets from Sly’s career with the SDUK, patchy information from engraving dictionaries, and some mentions in secondary sources. But what I considered the keystone—the correspondence—was missing. Nonetheless I was able to piece together what I had, to tell at least a partial story of Sly and Co. from their beginnings with The Verulam, to their work with the SDUK, and their feats in colour printing, including William Lee’s Classes of the Capital, Knight’s Old England, and advertisements for the London and Dover Railway. Despite his invisibility in our history books, one of Sly’s illustrations is well known: the view of the Thames on the masthead to the first issue of the Illustrated London News. It contains his name hidden in a boat in the corner of the woodcut.

Probably Sly’s most famous piece of work: the view over the Thames for the first issue of the ILN, 1842.

I have only scratched the surface of the mammoth undertakings of Sly and Co., and I will continue to research the firm to uncover the works of these brilliantly talented tradesmen. But for now, what I have found so far on Sly and Co. is indicative of what I’d like to convey in this post, that research is not always straightforward, and it is easy to consider your topic lost beyond hope when there are missing pieces. To uncover untold stories and bring to light the lives of those missing from our history books is not easy, and sometimes you have to piece together what you can, patching the holes that cannot be filled by archives. There is no ‘right way’ to deal with the problem of missing archives, but the years we spend researching help to train us to find innovative strategies to deal with these otherwise disappointing situations.

This correlates with my work in antiquarian book buying and the rehoming of editions abandoned by libraries. We often see pleas for help saving archives on book history mailing lists, and it is devastating to think of this primary material being lost. I blame this feeling for my SDUK-book buying habit and recent acquisition of 102 years of the history of science journal Isis that was being disposed of by a university library in favour of digital editions.

But, in the words of Tristram Hunt MP, on missing files in the National Archives: ‘I’m hopeful it’s a temporary aberration…These things do get lost and come back to life.’

And that is our job as researchers, to bring history back to life.