Emma Burris-Janssen is a third-year PhD student at the University of Connecticut. Her research interests centre on gendered violence and trauma, which is how she became acquainted with the work of Mona Caird and the Great Marriage Debate of 1888, and she is currently working on a larger project connecting Mona Caird’s work on marriage with that of Thomas Hardy. Her dissertation will bring these research interests into tighter focus by examining figurations of criminalised abortion in the British periodical press (particularly medical journals) and the British novel from 1861-1967. As this project is in its early stages, reading recommendations are more than welcomed!

Is Our Memory of the Great Marriage Debate a Failure? 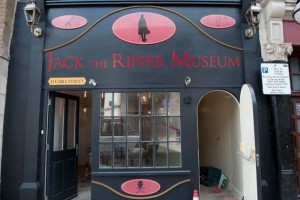 Some weeks ago, the building of a museum dedicated to celebrating the women of London’s East End was supposed to be nearing completion. Instead, as Lisa Mckenzie observes in her blog post for Times Higher Education, “what [has] opened on 12 Cable Street is a museum that […] sell[s] T-shirts and coffee mugs featuring a black silhouette of the Ripper stood in a pool of blood, reducing the women of the East End to a red smudge.” Quite rightly, the Jack the Ripper Museum’s opening has stirred public protest and created a controversy, with the designers of the museum recently calling the fruit of their own labours (they too thought they were building a women’s history museum) so much “salacious, mysogynist rubbish.” What is at issue here is memory. How are the women of the nineteenth-century East End to be remembered? Are they to be remembered as voiceless, victimised bodies laid bare to the prurient public gaze? Or, are they to be remembered as agential subjects who started and sustained numerous grassroots rights movements?

Of course, this is not the first time that the sensationalised image of the Ripper has threatened to silence a more nuanced representation of women’s histories. In 1888, a similar battle was waged in the pages of the Daily Telegraph with the Ripper murders eventually overwhelming the Great Marriage Debate – a public dialogue partly spurred by the words of early feminist journalist and novelist Mona Caird. As Judith Walkowitz puts it in her classic book City of Dreadful Delight, the “two media events, the marriage debate and the Whitechapel horrors, tensely coexisted for four weeks, but the balance of interest and fascination began to shift from West of East, from left to right. Finally, after 29 September the marriage correspondence ceased publication, and the Ripper murders took over the whole newspaper” (168). But, the problem of how we remember Mona Caird and the Great Marriage Debate does not start or end with the Ripper murders. 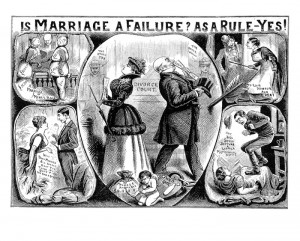 Is Marriage a Failure? Front-page engraving from the Illustrated Police News, 4 April 1891. (© The British Library Board)

Though August of 1888 is now better remembered as the month of the first Ripper murder, it was also the month that Mona Caird published her article entitled “Marriage” in the “wicked” Westminster Review. Because Parliament wasn’t in session and there wasn’t much to print, the much more popular Daily Telegraph decided to use Caird’s article as an excuse to pose the question that would spark the Great Marriage Debate of 1888: Is Marriage a Failure?

An estimated 27,000 readers responded, giving their personal views on the institution. Some used the opportunity as a vehicle for publicly airing grievances about such cardinal sins as a husband’s tendency to place his feet on the mantelpiece (oh, the horror!). Others wrote desperate pleas for help – for someone to bear witness to the daily cruelties, insults, and abuses they had to suffer at the hands of their spouses. Still others took the opportunity to declare their pious, undying loyalty to the institution.

Even before the intervention of the Ripper murders, the terms for remembering Caird’s “Marriage” essay were problematic, as it is unlikely that many of the Daily Telegraph’s letter writers would have read Caird’s original article in the Westminster Review. Even in the official 1888 collection of the Daily Telegraph’s Great Marriage Debate letters, Caird’s original article was not reprinted in full. Instead, the collection’s editor, Harry Quilter – a conservative barrister, who was far from sympathetic to the concerns of “New Women” like Caird – directed interested readers to the relevant edition of the Westminster Review if they wanted more than an extracted version of Caird’s piece. In the meantime, a “brilliant” paper by one Mrs. Lynn Linton (an opponent of women’s rights with whom Caird tangled in 1892 in the pages of the Nineteenth Century) was provided to the reader in full. While Quilter labels Caird’s text “rather vague and high-falutin’,” he commends Linton’s for its “vigorous common sense, its absence of sentimental feeling, and its concentration of wide experience,” all of which make it “well worthy of the closest attention, while as a piece of literary workmanship it is more than admirable” (13-14). And, it is this very collection of the Daily Telegraph’s letters that is still regularly referenced in discussions of Caird and the Great Marriage Debate.

127 years after the publication of Caird’s controversial essay, I still find myself swimming in questions about the way its content – and the public reaction to its content – has filtered into popular memory: How accurate is Quilter’s edited memorial to the Great Marriage Debate? What is re-membered in its pages? What is forgotten? And, beyond that, how accurately did the Daily Telegraph itself depict the nature and content of the 27,000 letters that allegedly flooded its editor’s desk? What has become of those letters? Do they still exist? What can they tell us about the relationship between the public and private spheres during this period? What can all of this tell us about which women’s experiences are remembered and which are erased?

In a discussion of memory, women’s rights, and Mona Caird, I can do no better than leave you with Caird’s own last words from the “Marriage” essay that eventually became so notorious. I have always found these lines to be haunting because of what they could not possibly have foreseen. There’s such a delicate optimism to them – an optimism that has too often been denied in the various rememberings, forgettings, and distortings of the piece:

We see a limitless field of possibility opening out before us; the adventurous spirit in us might leap up at the wonderful romance of life! […] We shall begin, slowly but surely, to see the folly of permitting the forces of one sex to pull against and neutralise the workings of the other, to the confusion of our efforts and the checking of our progress. We shall see, in the relations of men and women to one another, the source of all good or of all evil, precisely as those relations are true and noble and equal, or false and low and unjust. With this belief we shall seek to move opinion in all the directions that may bring us to this “consummation devoutly to be wished,” and we look forward steadily, hoping and working for the day when men and women shall be comrades and fellow-workers as well as lovers and husbands and wives, when the rich and many-sided happiness which they have the power to bestow one on another shall no longer be enjoyed in tantalising snatches, but shall gladden and give new life to all humanity. (252)